Dr, Petermann NP is our primary product formulator for the majority of our products. We also have a couple products from other companies and a few creams and external essential oil products that we make ourselves. 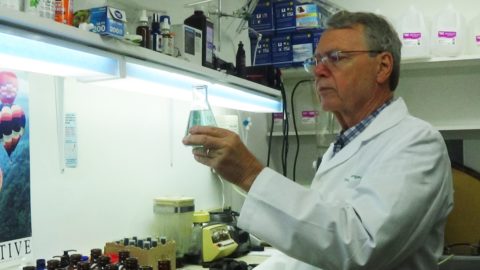 Dr. Petermann is the founder of Time Challenger Labs International, Inc. He has spent the last 18 years in
active Mitochondrial research, along with manufacturing and producing organic, natural supplements.

His lab is licensed by the State of Texas and produces over 180 unique products including cremes, tinctures, capsules and powders.

Additionally, he operates an active Naturopathic Medical practice. In 2003, Dr. Petermann begun pursuing his interests in medicine. However, his
choices were geared toward natural materials, methodologies and whole-person
healing.

His primary interest was in Mitochondria as this human material, he determined, was the secret of extended longevity and robust health. At the age of 65, he applied and entered Trinity School of Naturopathic Medicine and three years later received a Doctorate in Naturopathic Medicine. He graduated in September, 2018.

Before getting into natural health, Dr. Petermann had a career as a broadcast engineer in the late 1960’s. He enjoyed radio and television, production and engineering. In 1984, he worked on the groundbreaking music program known as Austin City Limits which is today’s longest running broadcast music program. Still active in audio and video production, he has over 400 Youtube.com health and wellness videos on the Challenge Life Better channel.

By 1977, he moved to the field of nuclear science where he designed and manufactured highly sensitive radiation detection devices. His firm, Warrington Laboratories, Inc. also researched and manufactured X-ray fluorescence systems for the detection of lead in paint. This device was the first product in history (anywhere in the world) to utilize an onboard computer on a chip.

Dr. Petermann was also asked to assist in the writing of the 1987 Lead Paint Act passed by Congress and signed into law by President Ronald Reagan. He is considered the father of modern lead paint detection science. However, in 1990 he left the company to pursue interests in the development of new cell phone technology. He co-founded, Direct Wireless Corporation (a publicly traded company), and created wireless systems utilizing unique technologies supported by Artificial Intelligence. His AI-Wireless U.S. Patents were the world’s first to incorporate AI into this field. He also holds the world’s first patent on 3-D cell phone systems.

It should be noted, the core of his system’s design was based upon human brain perception capabilities regarding perceived delay of signals. Later, he was asked by Larry Summers of the Clinton Administration to advise the United Nation’s Global Disaster Information Network on Non-Infrastructure Based Communications systems.

Dr. Petermann has seven books published with another three near completion. They include engineering, fiction, poetry and medical commentaries. He also enjoys humor with a cartoon strip now completed for publication. Over a dozen children’s books have been written and await graphics. Publication will begin in early 2021. On top of all of this, Dr. Petermann is a minister with Ministering to the elderly, his deep passion.